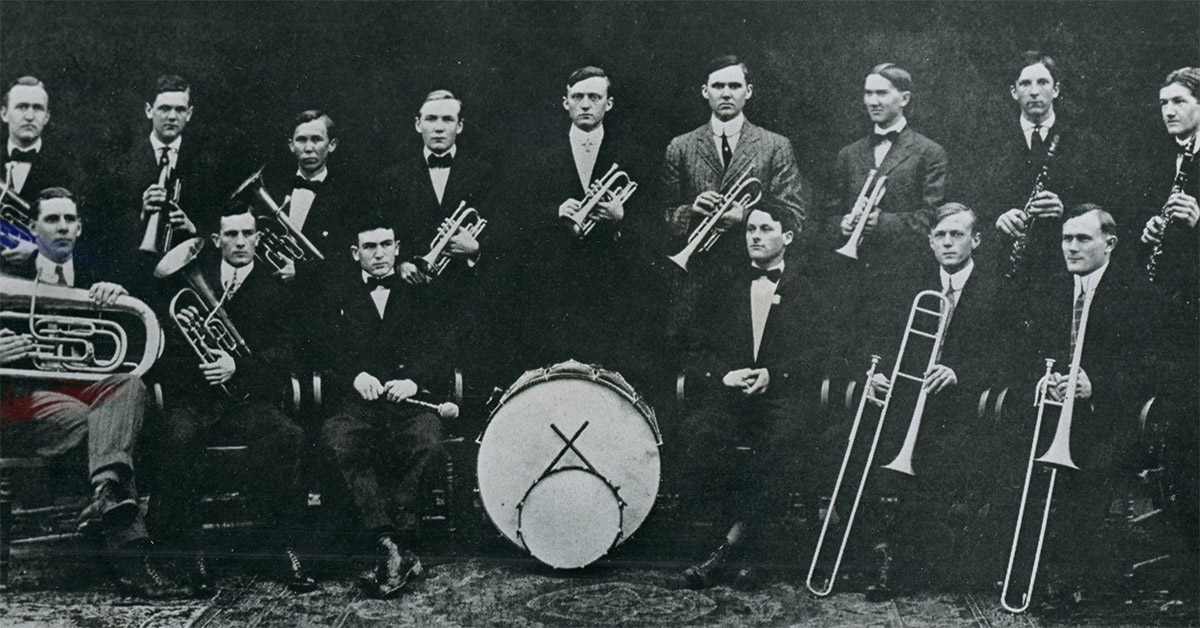 A picture dated 1921 is available which shows thirty-five men, one of whom appears the band director. A caption on the picture states: “1921 M. Cupero, Director”. The instrumentation consists of twenty-three brass, eight woodwinds, and two percussionists.

On November 25, 1940, the MC Band, which had become the official band of the 155th Infantry of the Mississippi National Guard was called to active duty and reported to Camp Blanding, Florida.

First Lieutenant Mackie grew ill while on active duty and was given a discharge from the military duty. He returned to Clinton an died early Tuesday morning on February 10, 1942. He was 59 years old, according to newspaper clippings.

The years during World War II were not kind to the Mississippi College Band. As one former band member, Dr. Harold Kitchens, remarked: “We were away trying to preserve the nation.” Following the second world war the band once again set about the business or rehearsing and performing. Band director included; E. C. “Pop” Elsey, A. T. Estes, Paul G. Fisher, Walter B. Duda, Charles C. Knox, and James Pettey.

Mr. Ralph Carroll became the band director in 1961. One memorable occasion during his tenure was when the Mississippi College Choctaw Marching Band embarked upon a trip to Mexico City for a football game between the Choctaws and the Pumas of the University of Mexico City. Although this rivalry had been happening sporadically since 1929, this was to be the first time that the band accompanied the team to Mexico. In fact, the Mississippi College Marching Band and Choctaw Maidens Drill Team (who were constantly on prayer lists because some deemed their skirts too short for Baptist kids) were to be the first of their kind to perform in the monstrous 100,000-seat stadium at the University of Mexico City, considered the largest stadium in the world at the time. The stadium was expected to be full, easily outnumbering the 40,000+ fans that attended the 1962 game at Memorial Stadium in Jackson. Money for the trip and chartered plane, to be shared with the football team, was raised by the band members through such events as car washes and hootenannies. MC President Richard Aubrey McLemore found additional funds to assist in the fund raising.

Mrs. Hazel Newman and her Choctaw Maidens, not having raised enough money to fly, departed Clinton a few days before the band and football team were to leave in order to catch a train for Mexico City in Longview, Texas. Mr. Carroll and the members of the band, including Band President Richard Joiner, arrived in Mexico City with the football team on November 21st, 1963. With two days left before the big game, the band rehearsed in the stadium (although the field had yet to be lined), and then embarked on a sightseeing tour around the city and at the ancient Indian pyramids. While touring the city, the band members and Maidens were approached by locals who were gesturing as if they had been shot and were trying to explain something in Spanish. It was a while before they understood the terrible news that President Kennedy had been shot and killed. MC President McLemore, who was also on the trip, contacted American authorities to find out if the game should be played. The authorities thought it acceptable to play this important game despite the situation. However, the government of the highly-Catholic country of Mexico declared a three-day mourning period and the game was cancelled.

Richard Joiner recalls: “The final most memorable event was, while waiting in the large airport waiting area to fly home, there were numerous televisions around showing President Kennedy’s funeral. At one point the Star Spangled Banner was played by the Marine Corps band—the reaction was instant—everybody in the large room (mostly Americans flying out) rose to their feet immediately—must have been a couple of hundred of us standing at attention—it was spontaneous and it was one of the most moving moments of my life.”

Mr. Glen Triplett assumed the position of band director in 1969 and shorly afterward moved the band the fourth floor of Aven Hall to the renovated “Hill Top Theater”.

Dr. John H. Hanbery served as the Mississippi College Band Director from 1976 through 1999, moving the rehearsal space from the Hill Top to the old Junior High Rehearsal Hall near campus. Dr. Craig Young took over the band in the fall of 1999 and continues to serve as Director of Bands.

* Adapted from a presentation by John H. Hanbery